Pianist and singer who was a rock and roll trailblazer; of bone cancer

Backup singer on many Isaac Hayes-produced sides for Stax; of lung cancer

Master of the guitar and Hammond B3

17
Bob Levis, 68
Chicago area guitarist known as Barstool Bob and most famous for his association with Otis Rush

One of the Pointer Sisters; of cardiac arrest

27
Peter Carr, 70
Session musician who was a member of the famed Muscle Shoals Rhythm Section

16
Patrick Ellis, 77
GOSPEL
Host of Gospel Spirit for more than
40 years on WHUR-FM in Washington, DC

Founding member of Fleetwood Mac, widely considered the best guitarist to come out of the British blues scene

Groundbreaking female trombonist and member of all-female jazz band, the International Sweethearts of Rhythm in the 1940s

AUGUST
17
Cleother (Cleo) "Pete" Williams, 81
Chicago drummer who played with many of our local legends, including Howlin' Wolf,  Willie Kent and Buddy Guy

Bryan Lee, 77
Blind blues guitarist and singer who, for many years, fronted the house band at the Old Absinthe House on Bourbon Street in New Orleans

Leader of the band The Zydeco Express

Austin, TX-based trumpet player who was a member of The Texas Trumpets

Harlem street musician who played with harp player Adam Gussow in the duo, Satan and Adam; of complications from COVID-19

Singer, who was about to release a new recording on Delmark​

(aka Guitar Crusher)
American blues guitarist/harp player/singer, based for many years in Berlin; of complications from an operation on his spine

Original bass player for Van Halen, who was replaced by Michael Anthony

4
John Valenteyn, 73
Co-founder of the Toronto Blues Society, a DJ and member of the Maple Blues Awards Steering Committee

Welsh musician who founded the. blues-ish band, The Spencer Davis Group; of pneumonia

28
Angela Kilgo-Cunningham, ?
Vocalist for the Chris Canas Band; of cancer

GOSPEL
Singer for the Rance Allen Group; of complications from surgery

6
Scrap Iron, 69
(aka Frank Robinson Jr.)
Longtime road manager for Little Milton and in recent years a fixture on the Legendary Rhythm & Blues Cruises; the result of a car accident in Memphis

19
Hal Yeagy, 63
Owner of the Slippery Noodle Inn in Indianapolis, who transformed it from a lunch counter with two employees to an esteemed blues music destination; of cancer

The youngest son of Muddy Waters, who was pursuing a music career of his own and was working on a CD at the time of his death; of a heart attack

Rock guitarist and founder of the band, Mountain, ​most famous for the song, Mississippi Queen; of cardiac arrest
​ 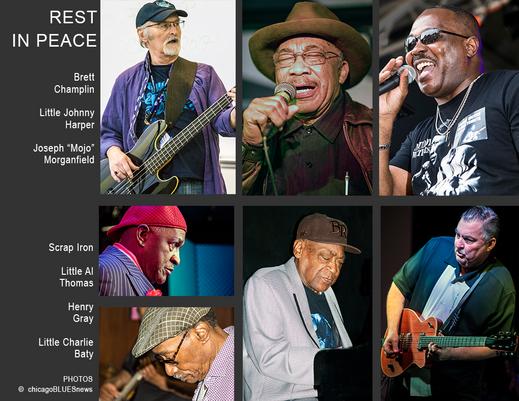 Chicago-based musician who worked with everyone from Eric Clapton and Etta James to Leon Russell;  keyboard player for the Chicago band, The Buckinghams

Guitarist and founder of the Chicago Blues Camp, which he sold in late 2019

A member of the San Francisco blues community who tirelessly promoted the blues scene in the Bay area.

Scott Sessions
Trumpet player for the Denver-based band, The Movers and Shakers, a band that made to the 2020 semifinals at the International Blues Challenge; murdered

Jazz pianist known for his work with the John Coltrane Quartet

Owner of Duke's Bistro, a blues and jazz club in South Bend, IN

Soul blues singer who co-owned the South Side club, Linda's Lounge, with his wife; of COVID-19

Evangelical Christian pastor and blues musician in Virginia; of COVID-19

Blues singer and bassist who played in the Lafayette, LA, blues and soul scene; Was a longtime member of Roscoe Chenier's Inner City Blues Band

Singer/songwriter famous for Ain't No Sunshine

Chicago's own  master storyteller and American roots singer/songwriter; of complications from COVID-19

BORDERLINE BLUES
Cornetist, composer and arranger specializing in American pre-swing jazz who played with Leon Redbone, the David Bromberg Band, Gregg Allman and others; of complications due to Parkinson's Disease

10
Big George Brock, 87
One of the last of the great Mississippi Delta bluesmen

Milwaukee guitarist, singer and songwriter who was a cousin of Albert Collins

14
Roosevelt E. Johnson, ??
Chicago bass player who played with a number of different bands, including Low-reen and the Maxwell St. Market Blues Band; of COVID-19